The viral video of Mamoudou Gassama  saving a child dangling from a balcony after scaling a building has done much to infuriate those on the right. All immigrants are out to rape and kills us they tell us every week, but now when you hear this just post the video Gassama channeling his inner Black Panther.

“Bravo,” Macron said to 22-year-old Mamoudou Gassama during a meeting in a gilded room of the presidential Elysee Palace where Gassama also received a gold medal from the French state for “courage and devotion.”

Gassama climbed five stories up the apartment building, moving from balcony to balcony, and whisked a 4-year-old boy to safety on Saturday night as a crowd below screamed. His actions went viral on social media, where he was dubbed “Spiderman.

The only problem with other media outlets reporting on this story is their insistence on making Gassama’s migrant status the bulk of the story. This is just another display of one human being seeing another in danger and instead of pulling out his phones, he took action.

Gassama said he has authorization to stay legally in Italy, which is where he landed in Europe in 2014 after a more than a year in Libya and a trip across the Mediterranean Sea. He came to France in September to join his older brother, who has lived in France for decades.

According to the AP he was ‘dressed in tattered blue jeans and white shirt’ from where I’m sitting he looks fine but he’s an immigrant so we have to play up our description. 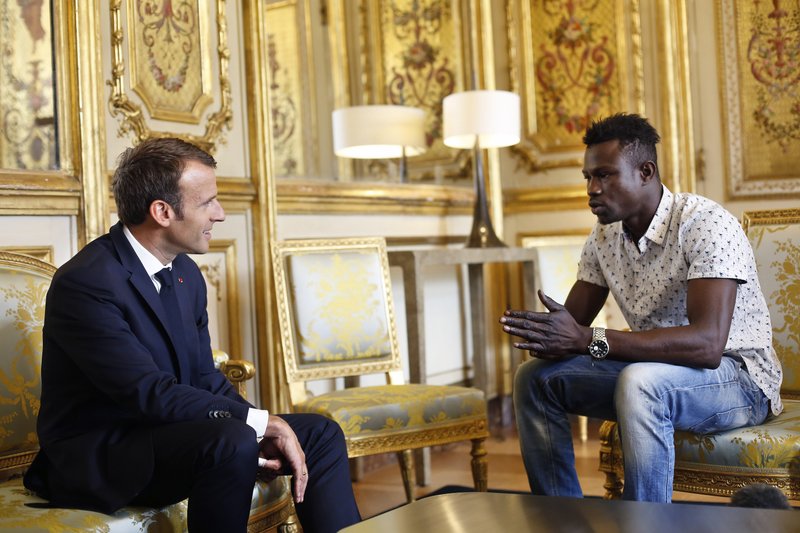 “I ran. I crossed the street to save him,” Gassama told Macron. He said he didn’t think twice. “When I started to climb, it gave me courage to keep climbing.”

Gassama said he felt no fear until he’d scaled five floors and got to the child, at which point he took him inside.

The father of the child was detained overnight for alleged parental neglect, and is to appear in court in September. He left the child alone while he shopped, then lingered to play Pokemon Go, Prosecutor Francois Molins told BFM-TV. The whereabouts of the child’s mother were unclear.

“You saved a child. Without you, no one knows what would have become of him,” the president said. “You need courage and the capability to do that.”

Macron offered to begin the naturalization process to make Gassama a French citizen and said, “Because this is an exceptional act … we are obviously, today, going to regularize all your papers.”

“You have become an example because millions have seen you” on social media, the president said.

Watch the video of Gassama’s heroics below: