Sunday’s elaborate prison escape in northern France sounds like fiction, and for good reason. Redoine Faid – who escaped in a helicopter after an armed diversion – is reportedly a fan of Hollywood crime films.

“Take away the cinema,” Faïd once said, “and you would have 50 per cent less crime.”

In a daring escape on Sunday — which only took ten minutes — Faïd had a team take a helicopter pilot hostage and broke into the supposedly escape prison and escaped with nearly no resistance.

But Faïd isn’t the only person to mastermind a prison escape, there are plenty of other daring prison escapes in history.

The courtyard where Faid’s helicopter landed was the only place in the prison with no anti-aircraft netting, this is because prisons found that the higher you build your walls the more people would try to escape with helicopters and planes.

In Greece one convict used a helicopter to escape from a high-security prison not once, but twice – in 2006 and 2009. He remains at large.

Drones are also becoming a huge nuisance for prison security, in some prisons there are being used to smuggle in drugs, but authorities believe drones were an essential tool in Faid’s escape.

You have to give credit to these twelve inmates who managed to escape a county jail in Alabama all with some peanut butter and quick thinking.

The men smeared the sticky spread over a number on one of the prison doors, subsequently a guard was tricked into opening the wrong door allowing twelve prisoners to escape, although they were all captured shortly after.

El Chapo is the 21st century’s Pablo Escobar, he has broken out of prison twice, evading authorities for thirteen years after his first escape in which he was smuggled out through a laundry basket.

His second escape was more imaginative, he escaped through a hole in his shower which led to a mile long tunnel system, complete with lighting, ventilation and railing for a modified bike. 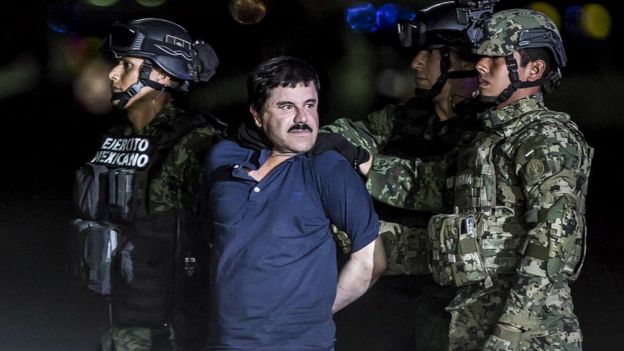 And if the Mexican authorities weren’t embarrassed enough his escape was caught on camera.

What do you see yourself doing at 50? I’m guessing escaping prison is not on our list, but it’s what yoga expert Choi Gap-bok did in 2012.

He escaped a detention cell in Daegu province in South Korea.

He was caught six days letter, and housed in prison cell with a smaller food slot.

The most famous prison escape which happened in 1962 near San Francisco. Alcatraz was considered the most secure prison in America and had such a reputation, prisoners who escaped other prisons were sent there.

Although, despite its reputation many prisoners still attempted to escape during its three decade tenure as a federal facility.

In June 1962 a routine morning cell check revealed that brothers John and Clarence Anglin and another prisoner, Frank Morris, were not in their beds.

They had made dummy replicas and escaped through air vents and an unguarded utility corridor, before leaving the island on a DIY raft.